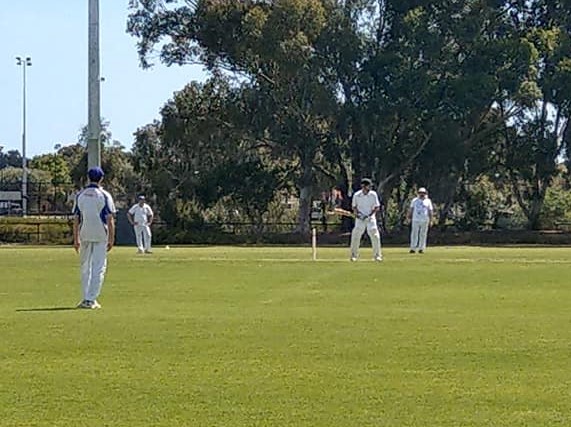 Round two saw a horror weekend for Kwinana as all teams suffered heavy defeats but the round was highlighted by club stalwart, Terry Clark, playing his 250th game for Kwinana.
2nd Grade travelled to Rushton Park to play Kelmscott with plenty of confidence coming off a victory in round one.
After winning the toss, Kwinana decided to bowl first and made early inroads before Kelmscott’s middle-order recovered.
Rob Taylor was at his best taking 3-9 from seven overs as Kelmscott posted 186.
Kwinana never got going with the bat slumping to 6-37 before being bowled out for 98.
4th Grade made a strong start against Thornlie after batting first.
Openers Paul Silchinger (15) and Aaron Kirby (24) put on 62 before Kirby was bowled.
One brought two and Kwinana had a collapse of 4-4; founding themselves struggling at 5-74.

Captain Richard Bell (14) tried to pull the tail together, but Kwinana’s batsmen couldn’t find their feet; eventually bowled out for 128.
The bowlers started well but never had enough runs on the board as Thornlie cruised to 5-207.
Oskar Johns Carpenter and Luke Collins took two wickets apiece.
One Day Cs kicked off the season with a devastating loss.

In the One Day C game Kwinana was bowled out for just 25 batting first against Kenwick including three run-outs.
The bowlers were picked apart with Kenwick finishing the match on 4-220.